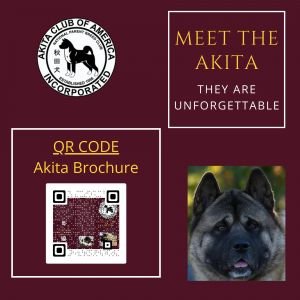 History of the AKITA

Meet the Akita  in PDF

The Akita is a primitive Japanese breed deriving fromregional landrace hunting dogs. The Akita shares arich history with its second type, the Japanese AkitaInu. Both Akita breeds have a background in hunting,guarding and, at a point in time, dog fighting. The Akitawas recognized officially by the AKC in 1973.

The Akita is a proud and confident breed. They can be challenging, particularly for first time owners. Owner soften describe them as stubborn and willful, but they are exceptionally loyal and form very close bonds with their people. They are very intelligent dogs, who are generally clean and quiet to live with. Akitas have a genetic predisposition for intolerance of other dogs, especially those of the same sex. The Akita does best in male/female pairs or as the only dog in the home. Being a hunting breed, they have a strong prey drive. An Akita may be aloof and standoffish with strangers; however, a socialized and well-trained Akita should never be outright aggressive. Akitas are not an overly tolerant breed; therefore, all interactions with children should be respectful and well monitored.

The Akita does shed heavily! The Akita has a thick, hardy double coat that goes through several seasonal coat blows every year. The breed does shed year-round, but the shedding will increase drastically during these periods of coat change. Owners of an Akita should regularly brush out the coat as well as utilize a force dryer to encourage coat regrowth and prevent the coat from becoming impacted. Akitas should also regularly have their nails trimmed and filed down. Exposing the Akita to these grooming exercises from an early age will make him easier to manage into adulthood.

While the Akita has a very proud and often self-serving demeanor, with an owner’s understanding of the breed’s genetic characteristics and what he is suitable to train for and accomplish, he is capable of filling many shoes. The American Kennel Club offers a plethora of dog sports and events that Akitas title in all across the country. We have Akitas titled in scentwork, obedience, rally, coursing, barn hunt, weightpull, agility, tracking, etc. (Note the Akita should never be used for protection sports or protection work due to his independent thinking mind and aloof nature)

The Akita breed is predisposed to hip and elbow dysplasia, as well as congenital eye and thyroid issues. Autoimmune disease also appears within the breed, but not all can be detected with a DNA test. Due to these risks, a buyer should only purchase a puppy from a breeder whose breeding dogs have passed all verified health tests.

The Akita breed requires clear and consistent boundaries from day one. The Akita is headstrong and due to his history and nature, thinks independently from his handler. He is not biddable with the innate desire to please his owner as many other breeds are, so a close bond and mutual respect should be formed when raising and training. The Akita must be well socialized and exposed to varying environments from puppyhood into adulthood. An Akita should not be expected to be friendly with all dogs and strangers since training never removes genetics, but he should be trained and socialized where he is not reactive, aggressive, or fearful to the world around him. The Akita is very intelligent and may become bored with trivial training exercises. Training sessions should be short and more frequent, rather than long and tiring. An Akita forms a very close bond with his people; consequently, training is best done with the owner present and in charge.

The Akita breed is plagued by puppy mills and poor quality breeders across the country. A breed as beautiful and enticing as the Akita attracts the wrong crowds from both the buyer and breeder perspectives. Due to the challenging nature, temperament, and health issues found in the breed, it is absolutely critical tha tbuyers do their due diligence in researching the breeder where they are purchasing their puppy. A breeder should be a member of or at bare minimum in good standing with the parent club, the Akita Club of America. Due to the risk of hip, elbow, patella, thyroid, and eye issues within the Akita breed, your breeder should be able to show you passing certifications that were received for those areas on their breeding dogs and any sire and dam of a litter you are considering. A general wellness vet is NOT adequate for health testing breeding stock. The Orthopedic Foundation for Animals, PennHIP, or comparative testing should be done and cleared before a dog is bred and a litter is produced. Any dog with "AKC papers" simply means the dog has been registered with the American Kennel Club. This does not guarantee the puppy meets the breed standard and will not have genetic health issues. An ethical breeder also breeds to conform to the respective breed standard. Dogs in their program are typically titled with the AKC or have points towards their championship, with performance titles showing added versatility. Ethical breeders will have a contract detailing their responsibility as the breeder and your responsibility as the buyer. To verify the ethics of anybreeder you may be considering, please contact the Akita Club of America prior to moving forward with a breeder.

Due to the high volume of poor quality breeders and puppy mills, as well as the high number of unprepared or unsuitable buyers bringing Akitas into their homes, rescues across the country are filled with purebred Akitas. These Akitas were produced by breeders who did not stand behind them after money was exchanged and buyers who did not fulfill their responsibility when bringing a dog into their lives. The harsh reality is that when a poor quality breeder sells a puppy to an unsuitable or ill-prepared home and that beautiful puppy turns into a very difficult adult dog, it is turned over to shelters and rescues. Due to rescues always running at maximum capacity, many of these dogs are euthanized. The Akita Club of America works alongside our breed rescues every day to help save, rehabilitate, and rehome hundreds of Akitas every year. Rescue is a wonderful option for some families and a necessity forthe future of this magnificent breed.